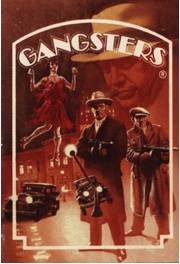 King of Crime is a fun, fast-action card Gangsters-themed game released earlier this year.  See it on Facebook at https://www.facebook.com/KingOfCrimeCardGame.  It features fabulous, fun comic Gangsters.

The artist and creator, Dan Smith, has graciously offered to let the Gangsters tournament feature his artwork this year.  It will appear on the name badges for this year and on the flags marking Gangsters' tables.  There are seven different pieces of artwork on the name badges and eleven pieces on the table flags.  Each of these mobsters appears in King of Crime -- but the coloring and background of the pieces that we'll see in the tournament are unique for Gangsters!

I will have copies of King of Crime available for purchase along with each of its expansions.  You can see a review of the game and learn the rules at http://www.youtube.com/watch?v=Y9eSJw0f-F8.  Even better, the special Viper card that was produced for Kickstarter supporters will be available from me for any who buy the game.  It's no longer available through any other channel.  Buyers will also be able to take one of the unique table flags home with them at the end of the tournament!

The table flag also has the logo of our favorite Donut marker -- and favorite treat of all of our loveable coppers, from Barney Fife to Robocop! 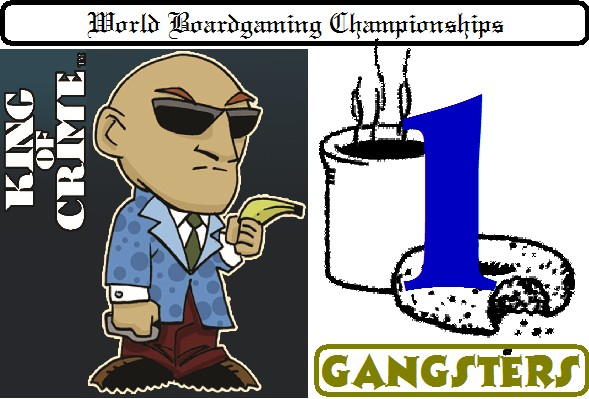 OK, while it's nice for the cops to get donuts -- how about the criminal masterminds?

Good news -- fresh donuts will be available at each heat.  How do you get one?

But lucky for you, the donut fun isn't over there.  In games using the donut rules, every time you place or upgrade a donut marker, you mark off a box on the back of your player chit.  The player who uses the most donuts in each heat wins a special, one-of-a-kind polo shirt decorated with the logo below in one of the five gang colors:

This year inexperienced players will have three options when they check in at each heat:

Those who select the first option will watch the rules video (unless they've just seen it during the Tuesday night demo) and then begin their game.  Those who select the second option will get an in-depth strategy demo on one of the following topics (based on which heat it is) in order:  1) Openings & Classic Strategies, 2) Cops on the Beat, 3) Maximizing Movement, and 4) Shootouts & Violence.  The third option can be selected with either of the first two (or not at the player's option); those who select the coach option will get an entire game of coaching from an experience player in exchange for automatically awarding the game to the coach (since s/he still needs to advance).

Reminders for the 2013 tournament:

See you in a few days!

Gangsters® is a registered trademark of The Avalon Hill Game Company.
King of Crime is owned by Dan Smith.  Artwork is used here by permission.