Learn How to Play in 5 Minutes
Current Tournament Standings

Those interested in joining the tournament should send an email to john@gameaholics.com as soon as possible. Deadline for entries for the first round is October 1st, 2011 at 6 pm Mountain Daylight Time.  Late entrants will not be accommodated.

All players will compete in five preliminary, simultaneous rounds.

Membership: No membership in any organization or any fees of any kind are required to play.

All games will be played using the free Hoity Toity game facilities on SpielByWeb.  All players must join that site and provide the GM with their login name.  There is no cost to join SpielByWeb.  As soon as possible, players should join SpielByWeb.  Although the interface is simple, some players may wish to play in a practice game there to familiarize themselves with the rules and the mechanics of the game and the website.  SpielByWeb is unforgiving -- you can't take back a decision once it's been selected.  Errors cannot be retracted.  Players are warned to carefully take their turn and to realize the "back" button does not undo a move.  On the other hand, players will find that the interface is very simple and makes the game easy to play remotely.

Starting a Game: As each round begins, the first player to log onto SpielByWeb will be responsible for creating the game using the name, comment, and number of players provided by the GM. That player will select a password of his/her own choosing and email it to the other players in the game.  The other players will join that passworded-game on SpielByWeb.com (by clicking on "games list" then "passworded-games" and then the join option available adjacent to their assigned game). Note: Passwords are caSe-sensitivE.  Colors and starting sets will be assigned randomly by SpielByWeb.

Preliminary Rounds: 5
Participants: No Limit (a minimum of 25 is required)
Rounds Begin: All five rounds begin on October 1st.  Players are requested to join their games by two days after the start date.
Round Length: 9 weeks*
Players: 4-5 per game
Participation: Each player is encouraged to check into SpielByWeb once per day (except when SpielByWeb has been notified of a player's absence/vacation).*
Absence/Vacation: To notify SpielByWeb that you'll be unavailable, click on "Going Away?" after logging in.  Then select the calendar date when you'll return.  While you're unavailable, SpielByWeb will put a suitcase next to your ID that will show other plays when you'll return whenever they mouse-over the suitcase icon.  When you return, click on "Back?" and then click on "[Mark Yourself Here]".
Drop Outs: Players may drop out at the completion of their current games and may ask the GM not to assign them to additional games at any time.  Players should plan to finish each game that they start.
AREA: All games will be AREA-rated.
Scoring: We use the same scoring as the World Boardgaming Championships:

*Slow players will be penalized one point per week if and only if a game runs over the 9-week time limit.  A "slow player" is defined as one generating more than one complaint within a game or more than three complaints within the tournament.  A valid complaint is one which is made after the game has been waiting on a single player, who is not on vacation, for more than 48 hours (i.e., the last game update must be more than 48 hours ago).  Most games should finish in 6 weeks.  I request that players stay on top of this for their games -- nothing ruins a game more than indefinite waiting.

Players will be assigned to their first games randomly though family members and friends may request to be placed in different games.  Such requests will be honored as much as possible.

Advancement: The ten entrants with the top total scores after the five preliminary rounds.
Tie-Breakers: If the top ten entrants cannot be determined solely based on total points (which is likely), the tie-breakers will be used in the following order:

All points and tie-breakers will be reported on this website as games end.  I doubt we'll ever need anything beyond the second tie-breaker (and, so far, the first tie-breaker has been all that's been needed). 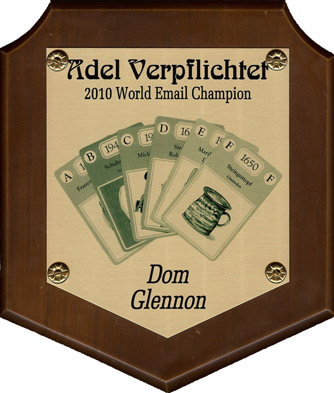 Semi-Final Begins: December 10th, 2011 (or sooner if the preliminaries finish earlier)
Semi-Final Format: All semi-finalists will play two simultaneous games (so that each may play 6-7 of the other 9 semi-finalists).  Family members will be placed in separate games if possible.  All winners advance to the final.  The highest second-place finishers (using the tie-breakers above as necessary) advance to fill the remaining seats (with the intent that the final will have five players).  No third-place finisher will advance (even if it means the final proceeds with only four players).
Final Begins: February 18th, 2012 (or sooner if the semi-finals finish earlier)
Final Format: The final will be a one-game, winner-take-all affair designed to conclude by April 28th.

Trophy: The champion will receive an "Adel Verplichtet" Email Championship Plaque by mail (or at a convention/tournament attended by both the GM and the winner). 2nd through 5th places will be determined by finish in the final.  6th place will be awarded to the top finisher in the semi-final games who didn't advance to the final.

I hope you all enjoy your games and have fun in the tournament!  Please contact John Pack with any comments or questions regarding the format, game engine, rules, or play as the games progress.

Check back here for updates as the tournament progresses!

Players of any version of Adel Verpflichtet, By Hook or by Crook, and Hoity Toity should easily adapt to the SpielByWeb engine.  However, there are a few details worth noting before beginning that I'll summarize here.

All other "actions" are handled automatically by the game engine since they involve no player choices.  As a result, players will want to either check in more often than required or to read their email notification carefully to see what happened since their last move.  Note: It's possible that some or all of Steps 3-5 will not be required on any given turn -- in which case, players proceed directly to the next step (or next turn)!

The colors are a bit different than in Adel Verpflichtet and By Hook or by Crook.  Here's the opening card inventory for each Hoity Toity color and how that compares to the original games:

The thieves of each original color are one line below that color in this table.

Note: Successful detectives advance based on current place (not position) just as they do in the original rules and at the World Boardgaming Championships. See this SpielByWeb forum for details.

Now you're ready to play!  Get ready for some seriously fun competition!

© Hoity Toity is copyrighted by Uberplay.  Adel Verpflichtet  and By Hook or By Crook are trademarks of the Avalon Hill Game Company. The World Boardgaming Championships is a trademark of the Boardgame Players Association.