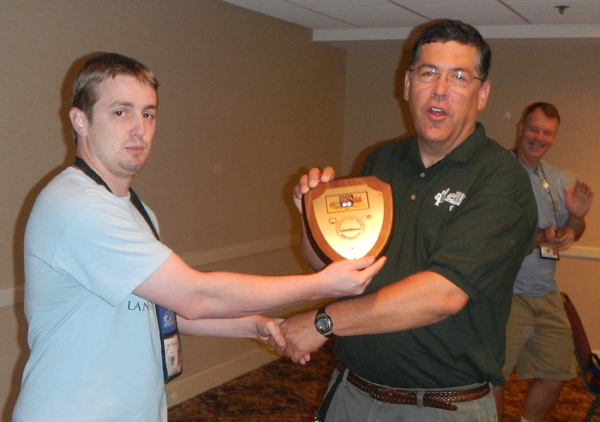 Daniel's USN saves Pearl Harbor from conversion on Turn Three to keep the POC low throughout the game and put the final nail in the coffin at the end of Turn 6 (with the score already down to 14).  Even the small NT1 bid of 1.5 was insufficient to keep Tim's IJN in contention.  The USN won a solid majority of the games during the final four rounds (6-3).  The rest of the top six were Robert Drozd, Greg Smith, Scott Beall, and Rob Kircher.  39 admirals were part of the original field; 38 total games were played before Daniel seized the crown!  In addition to the plaque, BPA laurels, and his name engraved on the traveling World Championship trophy, Daniel also wins a coveted invitation to the 2013 Top Ten Invitational.

The highest seed eliminates the lowest remaining seed in the last semi-final.  The USN finally dominates an entire round.  :-)  Daniel, the tenth seed, escapes the dreaded bye to move into the final vs. Tim Tow, the 12th seed, who is coming off his own bye.  The 14th seed has won the tournament before, so we won't see that record fall this time.  However, whether Tim or Daniel prevails, we'll crown a new player with a major championship!

Scott Beall is the highest remaining seed to be eliminated; his opponent, Rob "Cinderella" Drozd got the benefit of four carriers hit for one damage on the first four turns (three of them on the critical turn two alone).  That game also saw all IJN NLF fail to invade their targets.  In the other game, the highest playing seed (one higher than Scott) cruises to a POC lock after Turn 7 despite a 7-POC bid.  That earn Tim a spot in the final and a bye this round.  Daniel will come off his bye to play Rob for the remaining spot in the finals.  The IJN and USN split this round, but the IJN draws much larger bids.

This past round saw the two top seeds eliminated again.  Daniel Blumentritt, seed #10, is the sole survivor from the initial top ten.  However, Cinderella is also eliminated as the 38th seed goes down.  The USN won the first three games reported, but the IJN closed with the final two.  That's unusual since early wins usually go to the IJN while the longer games see more USN wins.  The remaining seeds range from 10th to 16th -- not much difference in the starting ratings, which ranged from 5298 to 5663.  It looks like anybody's tournament at this point...  Can Daniel survive the dreaded bye and who will get it next?  This round will be the semi-final for the highest seed to prevail (and take the bye next round).  The other winners included Tim Tow, Scott Beall, Greg Smith, and Robert Drozd (12th, 13th, 15th, and 16th seeds respectively).  Each has already earned laurels (as has the one player who just lost to the eventual champion)!

This past round saw all of the top seeds prevail except for the first and last boards.  That means the 4th seed (Michael Day) is now the favorite.  Vince Meconi and Daniel Blumentritt ares the only other top ten seed in action (7th and 10th respectively).  On the other hand, the 38th seed (Dakota Brueland) is still hanging tough – and the next seed up is the 21st (David Sherwood)!  As usual when the higher seeds do better, the IJN wins a solid majority of the games (7-3).  The other winners advancing into their Third Pearl Harbor Day are:  Greg Smith, Robert Drozd, Daniel Blumentritt, Rob Kircher, Tim Tow, David Sherwood, and Scott Beall.  Congratulations to all of them!

The first round was particularly tough on high seeds – with just four of the top ten surviving.  The bottom ten did just as well.  John Lindley moved from the lower half to the highest (which means the lower seeds won two games more than the higher seeds over-all.  Good thing for the top seed, Larry Meyers, that he had a bye.  The second and third seeds?  Gone.  No byes this coming round, however.  The first round winners are Scott Beall, Daniel Blumentritt, Dakota Brueland, Bill Burch, Michael Day, Rachael Day, Warren Day, Robert Drozd, David Gubbay, Rob Kircher, John Lindley, Ted Lyng, Vince Meconi, Jeff Miller, Ken Nied, Rich Prast, David Sherwood, Greg Smith, and Tim Tow.  Congratulations to all of them for making it to the second Pearl Harbor Day!

Back to Main Tournament Page

Victory in the Pacific® is a registered trademark of The Avalon Hill Game Company.